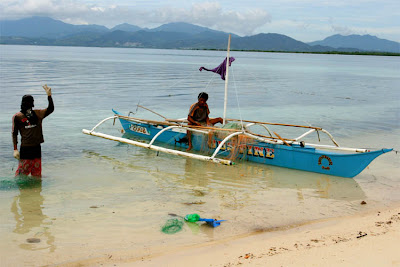 KOTA KINABALU: A Malaysian fish breeder kidnapped by Abu Sayaff gunmen while doing business in the southern Philippines island 17 months ago has returned home to his family.

Pang Choon Pong, 48, was reunited with his family after the gunmen released him about five days ago following negotiations with the armed group who was believed to be holding him on Jolo Island.
"I am very thankful to Prime Minister Datuk Seri Najib Tun Razak, our Chief Minister and all the leaders who helped reunite me with my family.

"I have been away for so long and am just happy to see my family," said the father of four, who is believed to have been kidnapped by his former business partner on Oct 5, 2011 during a trip to Sitangkai.

Following his release, Pang was flown in from Kuala Lumpur and was flown to Kota Kinabalu on Thursday, where he reunited with his family members at the Chief Minister's official Seri Gaya residence here.

Chief Minister Datuk Seri Musa Aman said the release was secured through careful and tireless negotiations with the group.

"We empathise with the family and the trauma they must have gone through. As such we decided to intervene and assist in securing Pang's release," he said.

Musa said that the family should thank Najib for his concern over the plight of Pang and his family.
"As you can see the leaders of the day are those who listen and reach out to the people regardless of race and religious background," he added.

get this widget here